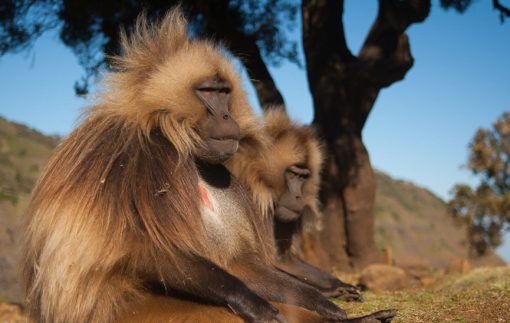 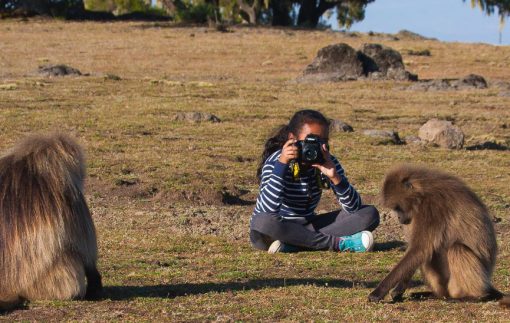 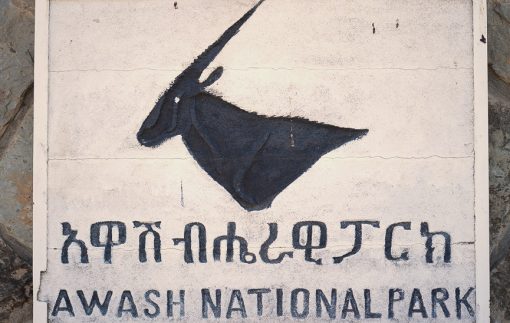 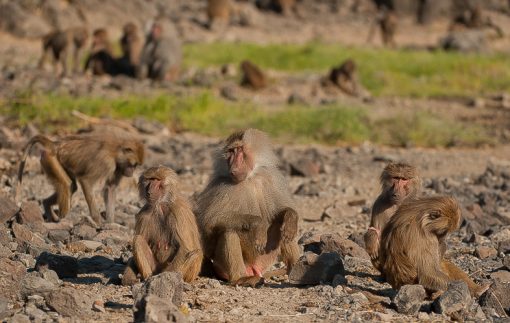 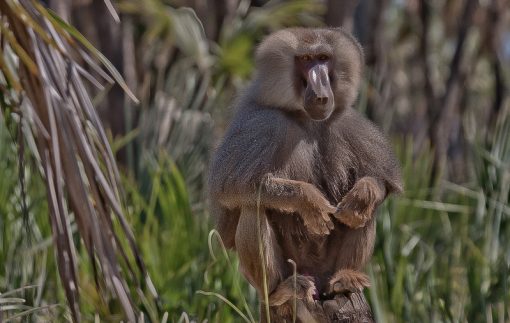 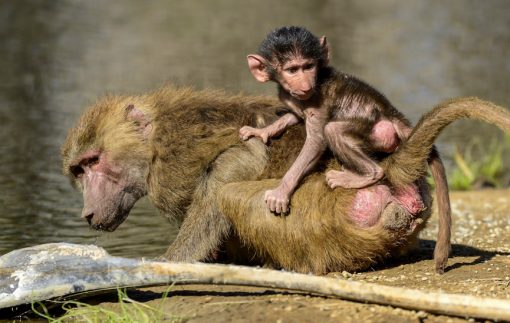 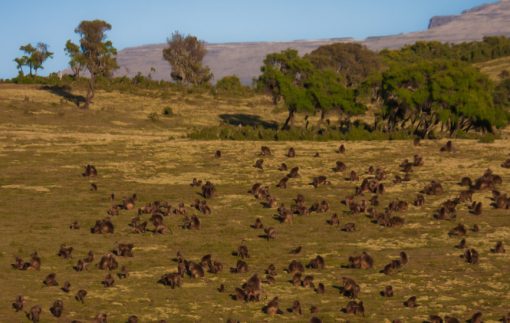 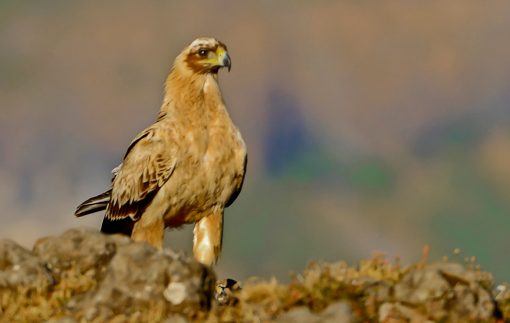 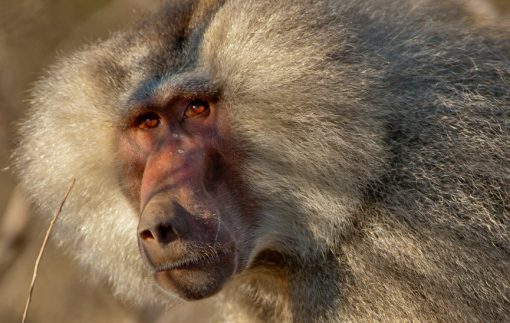 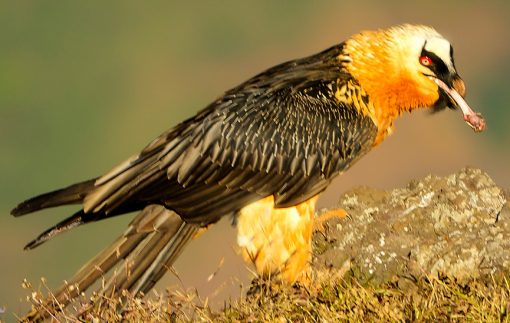 Follow us to the Simien mountains and meet Gelada Baboons in breathtaking landscapes. Observe some of the last Lammergeier, Walia Ibex and Hamdryas baboons in the wild. Get as close as possible to the animals and enjoy this fantastic photography safari.

This fantastic photography safari takes you as close as possible to the wilderness. Meet our closest neighbours in evolution, the Hamadryas baboons. Climb Ethiopia’s mountains for outstanding wildlife observations and photography. Follow us to the Simien Mountains and meet Gelada baboons in a breath-taking landscape. Observe some of the last lammergeier and Walia Ibex in the wild. Close encounters are guaranteed! Also explore the unique cultural and historic sites surrounded by a fantastic landscape. Explore Ethiopia – the hidden treasure of Africa.

Day 1: Arrival in Ethiopia and drive to Awash National Park

Arrival at Addis Ababa very early in the morning and after freshen up you leave for Awash National Park. This park which was established in 1966, is some 235 kilometres east of Addis Ababa and covers around 756 km² of Acacia and grassland. Awash National park is the home of wild animals such as the East African Oryx, Soemmerring’s gazelle, dik-dik, the lesser and greater kudu and warthogs. Anubis and Hamadryas baboons are present as well as over 453 species of native birds, e.g. the North African Ostrich and turacos. After arrival you have a first walk in the park. Overnight at Awash Falls Lodge.

After an early breakfast you make a full day excursion to the other side of the park to the hot springs to see the famous Hamadryas baboons which take a sun bath at the cliff. Overnight at Awash Falls Lodge. (B)

The Yangudi Rasa National Park is located in the Afar region. The majority of the National Park’s area is covered by sandy semi-desert and wooded grassland. If you are lucky, you may have the chance to observe the Abyssinian wild ass for which the sanctuary was set up in 1977. Overnight at Erta’ale Hotel. (B)

Full day game drive in the park. You can take pictures of the endemic wild ass and some other mammals and – of course – birds. Overnight at Erta’ale Hotel. (B)

After a relaxing breakfast you leave for the famous shield volcano Erta Ale. Before there is some time for drinking tea and relaxing, you set up the camp at Dodom. The assent to the active volcano usually takes between two and a half and three hours. Once you arrived at the top of the mountain, dinner will be served. Afterwards, it is time to visit the only permanent lava lake in the world which has been existing for more than 120 years atop of this 600 meters’ mountain. Camping at the top of Erta Ale. (B/L/D)

Enjoy the beautiful sun rise before the descent to the camp in Dodom where you have breakfast. You continue your journey to Hammed Ela. Overnight at camp site. (B/L/D)

Visit Dallol, the hottest and one of the lowest lying (116 meters below sea level) places on the planet. Here you can take fascinating pictures of the different elements – mostly sulphuric – with their cocktail of colours displaying themselves on the surface of the earth, some of them forming small ponds. The area is also full of sulphurous hot springs and you visit the different volcanic formations. After enjoying the scenery, you drive via Hammed Ela to Mekelle. Overnight at Axum Hotel. (B)

The drive from Mekelle to Lalibela takes around eight to nine hours. After the attractive ascent from the plains of Alamata to Korem, where there is the beautiful crater lake of Hashenge, you continue the truly enjoyable drive through Betmera up to Mai Chew. There, the Italian army defeated the Ethiopians in 1936 and ruled the country until 1941. The route is full of ups and downs, twists and turns and passes through the greenest part of the Tigrai and Amhara regions. You also enjoy the marvellous views of the Lasta Mountains. Overnight at Cliff Edge Hotel. (B)

At the end of the 12th and beginning of the 13th centuries King Lalibela of the Zageyou Dynasty built a series of rock hewn churches. The “New Jerusalem”, as he called it has been declared a UNESCO world heritage site in 1978. There are eleven churches in the town named after him and some in the surrounding countryside. All are still in use today. After breakfast you visit the first group of churches in town. They lie in rock cradles one behind the other: Bete Golgotha, Bete Michael, Bete Mariam, Bete Meskel, Bete Danaghel and Bete Medhane Alem. After lunch you see the second group of churches. The group of four is situated in the south of the Jordan River and comprises of Bet Emanuel, Bet Mercuiros, Bet Abba Libanos and Bet Gabriel-Rafael. Bet Emanuel’s elaborate exterior is much praised by art historians. After a day full of history and art you have the possibility to relax in one of the best traditional coffee houses in Ethiopia. Overnight at Cliff Edge Hotel. (B)

Today another long drive awaits you. This time you use the newly built asphalt road which connects the two former capitals of Ethiopia, Lalibela and Gondar. Several stops to take pictures of the amazing landscape are planned. You have a short break in Gondar, the 17th century capital of Ethiopia which always refers as the Camelot of Africa because of its fascinating castles. Afterwards you visit Youleka, the village of the Bete Israelis (also known as Ethiopian Jews or Felashas) which picturesquely lies close to Kossoye. Overnight at Simien Park Lodge. (B)

Simien Mountains National Park is located in the North Gondar zone of the Amhara region. Its territory covers the Simien mountains and also includes Ras Dashan, the highest point in Ethiopia. The national park is home to a number of endangered endemic species, including the Ethiopian wolf and the Walia Ibex, the Gelada baboon and the caracal. More than 50 species of birds inhabit the park, among them the impressive Lammergeier with its three meters’ wingspan. You spend the whole day in the Sankaber region of the park to take amazing shots of Gelada baboons and the breath-taking scenery. Overnight at Simien Park Lodge. (B)

Today you explore the Cheneq area of the park. Passing through marvellous landscape you reach various spectacular viewpoints such as Inatye situated at 4, 70 meters about sea level where fascinating landscape pictures of the valleys below can be realized. Here you also have the opportunity to observe the Walia Ibex and the lammergeier which is why you spend most of the time at this spot. Overnight at Simien Park Lodge. (B)

Upon arrival in Gondar city tour through the medieval capital of Ethiopia. Emperor Fasilidas founded Gondar as his imperial seat in 1632. It then became a great commercial centre from the 17th to the mid-19th century. The tour includes the fortress-city and royal enclosure of Fasil Gibbi as well as the imperial bath. During the Ethiopian-orthodox holiday Timkat a nearby river is diverted to fill an area the size of a small swimming pool. Worshippers plunge into the cold water in a re-enactment of the baptism of Christ in the river Jordan. You also visit the famous Debre Birhan Silassie church, the only church that was saved from Mahdist invasion in the 1880s, according to the legend, by a swarm of bees, which routed the invaders. The walls and ceiling are completely covered with murals. The angels’ faces on the ceiling have become a common motif in Ethiopian design. Overnight at Goha Hotel. (B)

Day 14: Flight back to Addis Ababa

Transfer to the airport for your flight to Addis Ababa. There, another sightseeing tour is scheduled which includes the Archaeological Museum where the oldest hominid fossil is exhibited, the superb Holy Trinity Cathedral (also known as St. George Cathedral) and the Merkato which is the largest open-air market in Africa. You additionally pass by some prominent statues and monuments of the city. In the evening, you are taken to one of the best traditional restaurants in Addis where you enjoy dinner and traditional folkloric dances with coffee ceremony. Afterwards transfer to the airport for your departure flight back home. (B)